Do We Have Any Powell's Left?

Share All sharing options for: Do We Have Any Powell's Left? 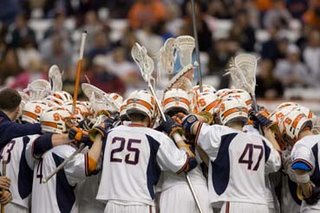 Getting you up to speed, when I was a junior in high school in New Jersey, they brought a bunch of new sports in including lacrosse. 47 people tried out for the team and only one had any actual experience playing the sport. This was 1995 and back then it was still a private school sport in those parts. We had a certain Bad News Bears quality to us and it showed in the final scores, getting beat 18-2, 20-6, 17-3. I vividly remember being congratulated on multiple occassions for our good sportsmanship in losing. Apparently, the refs weren't used to, well, good sports with the private school kids...go figure.

Anyway, by our second year we finished a respectable 8-9 and a few of us got some accolades. It was at this point I got into Syracuse and multiple people said to me "Now you can try out for the Syracuse lacrosse team."

As Chris Rock would say, "Slow down."

Suffice to say, I didn't pull a Rudy and instead rooted on the Orange while learning what real lacrosse looks like (the high school version being very physical, the college version being more finesse and skill). My first game was arguably one of the best lacrosse games in college history, Syracuse beating Virginia 22-21 (I believe).

Alright, enough already, what's the point here? The Syracuse lacrosse schedule was announced today. The Cuse, last a champion in 2004, will look to get back to the Final Four for what seems like the 89th time in the last 90 years (actually, the Orange have played in every Final Four since 1982 except for 2005...that's crazy). Your defending National Champion is Virginia, who beat Cuse in the semis before beating upstart UMass.