Share All sharing options for: Boise State Just Blue Themselves 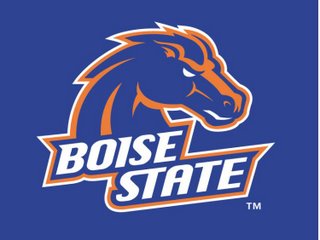 According to Scout.com, those party crashers in Boise are not only taking on college football's elitist system for determining its champion, they're also taking on the network responsible for you and I even knowing they actually exist. Ballsy move on the part of Boise State...just ask Harold Reynolds what happens when you take on the throne.

ESPN has been a good tool to promote Boise State football, with the Broncos featured on the sports network giant numerous times over the last seven years. In return for the national exposure, the university has bent over backwards time and time again for ESPN. They've allowed their games to be moved to Friday night, Thursday night, Wednesday night, Sunday night and even 8 A.M. on a Saturday morning. They had agreed to move this Saturday's game with San Jose State from its originally scheduled time of 4 p.m. to 8:15 p.m.

This time, when ESPN wanted Boise State to move its Nevada game to Friday night of Thanksgiving weekend with just two weeks notice, Boise State Athletic Director Gene Bleymaier refused. After all, this was a holiday weekend meant for families. Many Bronco fans planned their holiday celebration around the football game already, and had made air and hotel reservations months ago. The Nevada game typically draws 5-7,000 Bronco fans. ESPN tried to run roughshod on the Bronco fans and was hoping Boise State would care more about exposure than they did about their fans. The fans would have to change those reservations and tell their visiting relatives that they would have to leave the house on Thanksgiving night because they needed to leave the next morning on very short notice. But there's more to the story. ESPN then pulled a "power play" by telling Bleymaier that if he did not agree to move the Nevada game, they would not show the San Jose State game either. So Bleymaier calmly told the network "Fine."

Since ESPN reverted on their promise to televise the San Jose State game, KTVB-TV of Boise has stepped forward and will televise the game to its viewing area. The game has been moved back to its original kickoff time of 4 p.m. Mountain Time.