Share All sharing options for: Yet Another In A Long Series of Diversions In An Attempt To Avoid Responsibility 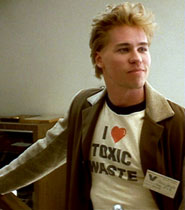 Last week's Ben Folds lyric-usage got the largest response in the history of the website...okay, it was one comment, but hey, we've been around for two weeks. Baby steps. This week, we up the ante by presenting TNIAAM's pigskin picks for the upcoming weekend with a little help from Chris Knight, Laslo Hollyfeld and the film Real Genius, the film that will forever make us wonder what could have been with Val Kilmer and cemented William Atherton's place alongside Karate Kid's Bill Zabka in the 80's Villian Hall of Fame.

All rankings courtesy of ourselves. We could use the BCS rankings, but let's face it, is our system any less credible really?

Prof. Hathaway:What are you looking at? You're laborers; you're supposed to be laboring. That's what you get for not having an education.

Recruiter: You are Chris Knight, aren't you?
Chris Knight: I hope so. I'm wearing his underwear.

Louisville, you are a National Title contender, aren't you? If not, take off your underwear now. 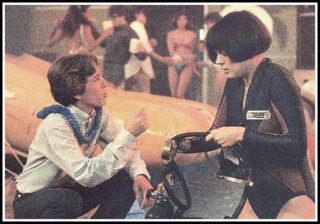 Jordan: Are you finished?
Mitch: I can't start.
Jordan: Because I'm here?
Mitch: I think so.
Jordan: Weird. Well I have to go.
Mitch: Me too.

The Big East Game of The Year Until Those Other Two Schools Do Stuff. Rutgers is an apocalyptic 6-0, Pittsburgh is an under-the-radar 6-1. Something's gotta give in the race for the Sun Bowl.

Chris Knight: You see Mitch, I used to be you. Lately I've been missing me so I asked Dr. Hathaway if I could room with me again and he said sure.

Wasn't too long ago those rankings were consistently the other way around. Nebraska may have worked its way back into the national discussion but the USC game confirmed that they are still a 2nd tier program. Texas will be more than happy to re-affirm that.

Prof. Hathaway: I want to see more of you around the lab.
Chris Knight: Fine. I'll gain weight.

I've been hearing a lot of pro-Wisconsin talk this week. How they're much better than people think and should be ranked near the top ten. Show me what you got, Badgers.

Chris Knight: Self-realization. I was thinking of the immortal words of Socrates, when he said, "I drank what?"

For Indiana, who, a week after "upsetting" Iowa is reminded of exactly where it stands in the Big Ten and the world in general. 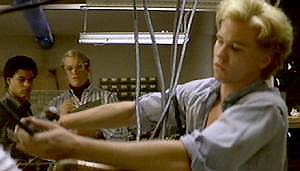 Chris Knight: OK, if you think that by threatening me, you can get me to be your slave, well... that's where you're right, but - and I'm only saying this because I care - there are a lot of decaffeinated brands on the market today that are just as tasty as the real thing.

Ole Miss, at least you have the advantage in gentlemanly club life.

For Mizzou, who even after last week's loss, has confirmed that this season they'll be able to step out of the mired quagmire that is the Big 12's middle class and compete for a championship game appearance.

Prof. Hathaway: You still run?
Chris Knight: Only when chased.

For Tulane, who did a great job getting the program back on track and didn't get nearly enough credit for it in the shadow of the Saints. Sorry about this one, though.

Chris Knight: Moles and trolls, moles and trolls, work, work, work, work, work. We never see the light of day. We plan this thing for weeks and all they want to do is study. I'm disgusted. I'm sorry but it's not like me, I'm depressed. There was what, no one at the mutant hamster races and we had one entry into the Madame Curie look-alike contest and he was disqualified later. Why do I bother?

Playing for Notre Dame at this point must be like playing for the Yankees. Win the whole thing or don't bother showing up at all. Everyone needs to lighten up, finally join a conference so you can manage expectations a little better (Hey, we won the Big East! Stop crying!) and worst case, really embrace those Silicon Valley Classic moments. 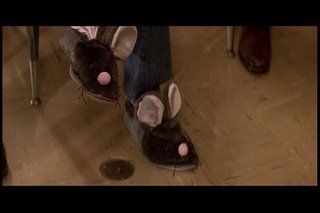 Chris Knight: May I take this opportunity to compliment you on your fashion sense, particularly your slippers.

Cal's absurd reasoning that "if we wear the kind of retarded-looking uniform that Oregon would wear against Oregon, that will lull them into a false sense of security and we can pounce" actually seemed to work. Let's pray they don't do it again. As for Washington, as Isiaiah Stanbeck goes, so go the Huskies. 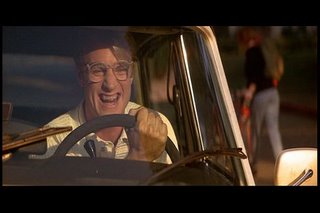 Kent: You're all just a bunch of degenerates!
Chris Knight: We are? What about that time I found you naked with that bowl of Jello?
Kent: You did not!
Chris Knight: This is true.
Kent: I was hot and I was hungry.

I'm sure Alabama fans (much like all other SEC fans) spent the off-season reveling in Tennessee's problems. Tables, you are hereby turned. Plus, I have no doubt that a tub of jello was involved in that Mike Price fiasco...assumedly strawberry. Roll Tide!

Chris Knight: First, you have to get even with Kent. It's a moral imperative.

Florida State ain't what she used to be, but if Boston College wants to be taken seriously at all in the ACC, they better start beating some of those upper echelon programs consistently.

I dunno, just seems like something all Michigan fans think.

At what point does Oregon say "You know that...I think everyone gets it. We're crazy enough to wear anything to get thier attention. Let's go back to wearing grown-up clothes"? I guess when Nike stops putting license plates in thier underwear.

Chris Knight: Look at it this way. Considering the type of people you are and the environment you're in, you have to admit the strong possibility this may be the only chance you ever have in your entire lives... to have sex.

Boise State has the chance to live like those BCS rockstars for once. The Idaho Fightin' Ericksons has the chance to get some bigtime exposure by beating an undefeated team and saving Myles Brand from humiliation...until Week 10. 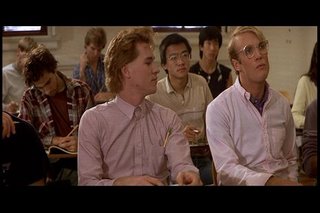 Kent: I'm gonna get you guys. Dr. Hathaway's gonna hear all about this. You know, you'll rue the day!
Chris Knight: "Rue the day?" Who talks like that?

I have no correlation between that dialogue and this game. I just needed to make sure it was involved. Besides, does anyone outside of College Station care anyway?

Colorado used to seem like a nice enough program. Then they became the bitch of Gary "Professor Hathaway" Barnett. Now, as much shit gets thrown on them, you can't help but laugh at them. Plus, we're pretty sure the program, like Kent, isn't getting laid as much as it used to.

Mitch Taylor: Something strange happened to me this morning.
Chris Knight: Was it a dream where you see yourself standing in sort of sun-god robes on a pyramid with a thousand naked women screaming and throwing little pickles at you?
Mitch Taylor: No.
Chris Knight: Why am I the only person that has that dream?

For the best exchange in the movie, the best game of the week. Personally, I think Georgia Tech is the Cal of the East Coast. Tough loss in first game, regrouped and now they're on track to win thier conference. Clemson is a little too smoke and mirror for me.

Someone told LSU that Fresno State was good. Someone lied.