What the hell is going on here?

Share All sharing options for: What the hell is going on here?

What is Troy Nunes Is An Absolute Magician?

TNIAAM is a place for I to alert you to my thoughts, ideas and inner most secrets regarding the world of college football, college basketball and possibly even a little college lacrosse. From time to time you'll probably see an inordinate amount of time payed to the teams of Syraucse University (Class of '00), which would be considered especially inordinate when discussing the current state of Cuse football.

What else is Troy Nunes Is An Absolute Magician?

I can't imagine I'll stick directly to college sports in my ramblings. I'm sure we'll discuss other sports as well as anything that tickles my fancy...assuming I have a fancy and learn just how to tickle it...in which case I will probably stop blogging altogether and spend most of my free time tickiling my own fancy.

What does "Troy Nunes Is An Absolute Magician" mean?

If you're not familiar with the inner workings of Syracuse football from the years 2000-2003, and if so, ignorance is bliss, you probably aren't familiar with any of Syracuse's underwhelming QBs, one of which was Troy Nunes. In the post-Donovan McNabb era, The QB position at Syracuse football went from prime rib to skirt steak. A couple different guys seemed to revolve but even after costing himself the job over and over, Nunes always found himself back in charge.

It was 2002, a 1-2 Syracuse team came into Auburn with not much expected of them. This was before Auburn's recent surge back to the top of the NCAA so they weren't dominant but they were supposed to dig out the Orange like an Alabama tick. Instead, Cuse played a great game and found themselves with a chance to win late.

Somwhere towards the end of the game, Nunes was orchestrating a solid drive and completed what I can only assume was a 3rd down pass to save said drive, at which point the ESPN2 announcer (I don't remember whom, it was likely thier D or E Team) exclaimed, without a hint of irony, "Troy Nunes is an absolute magician!"

Nunes guided the Orange into overtime and into 2nd overtime before the Orange finally gave out (as they usually do in such games), losing to the Tigers 37-34. 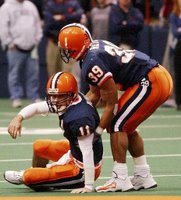 Nunes' career was never the same and he flitted away into oblivion, a footnote after Marvin Graves, Don McPherson, McNabb and whoever the Orange's savior will be in the a few years. But we will always have that Auburn game, and we'll always remember our little magician for that magical ride he sometimes, almost never, took us on.