"We've Got a Great Cowboy Degree"

Share All sharing options for: "We've Got a Great Cowboy Degree"

Many jokes have been made about the impending "youth movement" of college basketball recruiting, few better than Mr. Show's Recruiters skit above.

"I'm with - we have two buildings. And we play outdoors. But we mean well." 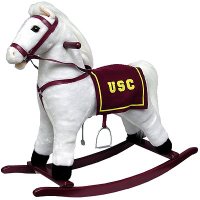 Well the joke is wearing a little thin with the news that USC has offered a scholarship to a 14-year-old. According to the LA Times, Dwayne Polee Jr., a 6-foot-6 freshman high school guard has made a commitment to USC, even though he has yet to play in a high school basketball game. Polee, expected to start as a freshman for says Tim Floyd offered him a scholarship and he accepted.

Now Polee hasn't entered into a binding agreement, he can change his mind as teens are want to do. God, when I was 14 I changed my favorite band once a week and my only concerns regarding college where what time the early games started on Saturday.

So how good is this kid? Polee's head coach at lays it all on the table. "He's pretty good."