To Beat a Mountaineer You Have To Think Like One 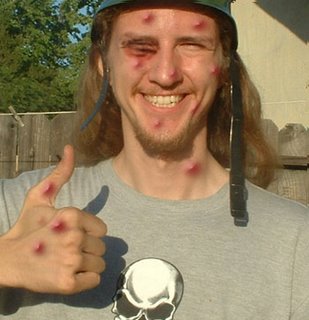 Apparently taking the adage "get inside the mind of your enemy" a little too far, The Courier-Journal reported that Chris Vaughn and Scott Long, two University of Louisville reserve wide receivers, did thier best backwoods Mountaineer-impression on Sunday firing paintball guns at people coming out of the Haunted Hotel in downtown Louisville.

Vaughn, a sophomore from New Haven, Conn., and Long, a redshirt freshman from Southport, N.C., "have been placed on investigative suspension immediately and will be disciplined internally" coach Bobby Petrino said.

I'm beginning to think that Division 1-A football players all got together on Facebook and started a challenge to see what you can get away with without actually getting in trouble beyond missing a few football games. For the record, they were both charged with second-degree assault but who knows if it'll stick. If the Ville ends up beating the Mountaineers, I'm sure it will quietly disappear.

And it demands a mention...the Haunted Hotel? How does one nonchalentely throw that into an article and not go back to it. The website says that to prepare yourself for "heart pounding moments of terror by staying the night" where, assumedly, the ghost of Pervis Ellison is known to roam the hallways nervously.