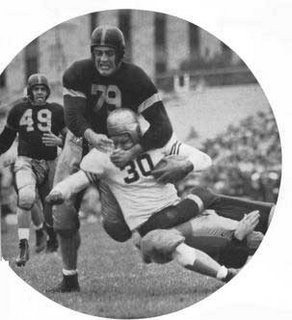 Your quarterback wins the Heisman trophy.

You play in the Cotton Bowl (when that meant something)

Some group called the Washington Touchdown Club (which I believe is now the name of the Redskins' secret down-low society) decides that (despite losing in the Cotton Bowl) you are the best team in the land and awards you with their distinction as National Champion.

Every year a week before they play, every sportswriter and their mother bring up the fact that its been INSERT NUMBER HERE years since Navy last beat Notre Dame and maybe, just maybe this is the year that ends and once for all and the United States Naval Academy will have finally done something useful with its existence. Well I'm here to tell you this may just be that year...and I'm even gonna start telling you TWO weeks before the game.

If you haven't been paying attention, Navy is currently a very frisky 5-1. They're nothing Earth-shattering about those wins. One was against lowly Stanford. Another against the Steve Tannyhill-less Pirates. In the last two weeks they beat UConn on the road and moved closer to winning the Commander-In-Chief Trophy by beating Air Force. For the most part their wins aren't pretty or blowouts or shocking. Just consistent.

My argument will either gain credence this weekend or be shot out of the water faster than me deleting this post come Sunday morning. Navy hosts the 5-0 Rutgers Scarlet Knights. I don't know the last time the phrase "We'll see just how good they are after they play " was uttered, if ever, but there you go. If Navy is able to beat Rutgers, that'll set up a showdown of one-loss teams the following week in Philadelphia when the mighty Fighting Irish come to town.

Notre Dame is currently enjoying the marbled fat on the Angus beef steak they call a schedule. They feel much better about themselves after beating up on Purdue and Stanford. Previous to that, the then #2 Irish had seen their summer high of National Championship chatter come crashing down at the feet of and the rest of the Wolverines. They were lucky to eek out a victory against a team that decided its better to just quietly lose the rest of thier games rather than give coach John L. Smith more reasons to cause bodily harm to himself. 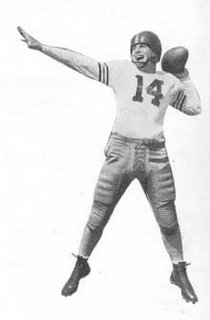 Since then, I think we've learned a few things... #1 - Notre Dame isn't as good as the hype (imagine that!). #2 - Notre Dame peaked in week1 against a solid Georgia Tech team. #3 - Notre Dame is a one-loss team desperate to be a part of the National Championship discussion again. #4 - The only game left on their schedule with any meat to it is the USC game

Say what you want but I really don't see them getting too excited over a team they've beaten 43 straight times and are 9-69-1 against all-time. ND will have come off a UCLA game where they will probably be given a good effort from the Bruins. Looking ahead, they'll see the Navy game as the start of a very easy four-game stretch that includes the horrendous , Air Force and the cadets of Army.

Again, all of this could blow up in my face within 6 days, but there's something about this season and the way its turned out for Notre Dame...it would just make sense, wouldn't it? National Championship hopes with a 2nd year coach in August, unbearable losses and shame in October. I think Notre Dame might even know a thing or two about that. What do you think, Ty?

Just keep your eye on that Rutgers-Navy game...now when was the last time anyone said THAT?