Orange you glad? You should be...

Share All sharing options for: Orange you glad? You should be...

This is what I was talking about when I say there will be juuuuust a little too much attention paid to Syracuse atheletics on this site. This rant is about 2 years too late but its something that I need to put out there...kinda like Hep C.

Two years ago, Syracuse did what many had been waiting a long time for...they fired Paul Pasqualoni as head coach of the football team. 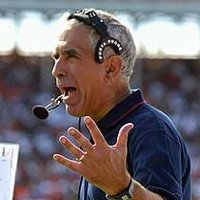 Many outsiders cried foul when Pasqualoni was fired and its understandible why. Looking at the stats and the records and the bowl games, the fans of Syracuse should have been content with the outcome and consistency of thier team. What they were basically saying was "You're not a Miami, you're not a USC...you should be happy with the results he's given to a 2nd tier school like yourselves. Besides, you're a basketball school anyway...this is all gravy."

Now here's the thing most people outside of Central New York don't realize. Syracuse is a football town. It's as blue-collar as they come. They're a city in Syracuse but it might as well be one of those fake backdrops on Universal Studios...if you've ever driven through it you were constantly amazed with the lack of people in it or buzz around it. The people of Syracuse are in factories, farms and the suburbs. The Buffalo Bills and the New York Giants are hot topics. The Carrier Dome, which provides a great atmosphere for the basketball team, was designed and created to given the football team the advantage it needs in the cold weather.

Yes, Boeheim is a God around those parts...it'll be Jim Boeheim Court at the Carrier Dome the second he retires and the people up there treasure the success of the basketball team. That said, there's nothing that the people of Central New York would love more than to see the Syracuse Orange football team be dominant. And to be honest, there's no reason they shouldn't be.

And that's why Paul Pasqualoni got fired. 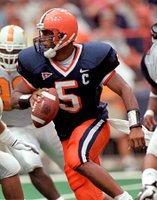 to 2000. The Orange were coming off a Gator Bowl victory against North Carolina. Cuse was ranked in the preseason. Donovan McNabb, Big East rookie of the year the previous season, was emerging as a sleeper Heisman candidate. The team was solid. Thus, it was with some shock that they lost thier first two games of the season, a re-match with a decent North Carolina and then a strange loss to Minnesota, who wasn't very good at all. What I didn't realize was, this is how things were going to be with Coach P. Very few teams became so predictable in thier underachievement when it mattered and overachievement when it didn't. After the 0-2 start and all expectations washed away, Cuse rattled off 8 straight wins until losing to a Miami team they should have beaten at home. They ended up in the Liberty Bowl, beating Houston in a game I doubt anyone remembers (even I had to look it up).

1997, a pattern emerges. The Orange enter the season ranked and beat Wisconsin in a game I attended a remember being very sloppily played and thinking the team looked unprepared. Well a

fter three straight losses to beatable NC State, Oklahoma (before Bob Stoops) teams and a solid Virginia Tech team, the Cuse were right back where they feel comfortable. The team had yet again failed under high expectations and talent and the only think you could imagine was that they were completely unprepared with how to handle things early in the season and as a favorite. Throw in the fact that they were being completly outcoached and you had a clear idea of what was going in. Surprisngly the team got its footing, rattled off 8 straight wins and somehow got a hold of the Big East Championship (thank God for Temple and Rutgers back in those days). They made the trip to the Fiesta Bowl as the original BCS posterchild for "teams that don't deserve to be there but only got there cause of their conference affiliation" and didn't do themselves or the conference any favors by getting slapped around by Kansas State 35-18.

So you begin to see that, on paper, that was a very successful season. But clearly this team underacheived and did so in the worst possible way, squandering all thier momentum early on by losing to beatable teams, thereby forcing them to play with thier backs against the wall for the rest of the season.

A few weeks ago Jeremy Shockey said that he felt the New York Giants were neing outplayed and after realizing two things about the Giants (Number One, they can trackmeet with anyone in the NFL once they get cookin' and Number Two, they were being run roughshot over by anyone and everyone and they could do nothing about it until the offense clicked), its clear that he was 100% right about the outcoached part. That was Syracuse under Coach P. The talent was there to be 11-1 but he always found a way to go 8-4, which leads us to...

1998. The most highly touted Syracuse team in years. I can't confirm but I believe the preseason rank was #12 or so. McNabb and a stud running game were gonna pave the way for Syracuse's first legitimate shot at a National Championship since 1987. The first game was a doozy against eventual champ Tenneesee. Still, it was at home and everyone forgets that it came down to the last play, a hazy blown call by the ref didn't help matters, but Cuse lost by one point. While in retrospect it was about as respectable a loss as you can have, it did what we all came to expect...killed the early-season momentum. What really made the loss sting was the following week, in what became the defining win in my time at Syracuse...a win at Michigan. In the Big House! and I don't mean we won, I mean we kicked thier ass. The 38-28 final score was not indicative of the game, I promise you. All of a sudden, here was the early season results that we had been promised all these years. Finally, we were actually coming through on all the hype. It was justified. Now, all we had to do is trust that Coach P wouldn't let the team get ahead of themselves and focus on not having a letdown the following week against N.C. State.

Following that, three 3-game win streaks bookended a loss to West Virginia and the Orange again somehow pulled off a Big East Championship with an 8-3 record. They went into the Orange Bowl again with the "they don't deserve to be there" monkey on thier backs and again did nothing to disprove that by getting absolutely manhandled by Florida 31-10.

McNabb graduated after that season and with him, so went success at the QB position. Two middling years at 7-5 and 6-5 followed. Then, a ray of hope in 2001 with a 10-3 season, but it 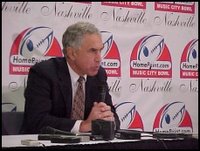 was back to normal after that, with Coach P leading the team to 4-8, 6-6 and 6-6. Georgia Tech beat the Orange 51-14 in the Champs Sports Bowl and finally, the new AD at the university, who had given Coach P a stay of execution weeks before, had seen enough.

The jury is still out on Greg Robinson. I do not mean all of this as a mea culpa on his hiring. 1-10 was absolutely unacceptable, unless you're Temple and its called "baby-steps." This season, I expect the team to end up around 5-7 and I'll be happy with that. But even if Robinson eventually doesn't pan out and we move on without him, I'm still hapy we got rid of Pasqualoni. We mired in a sea of mediocrity with him. Yeah we went to two BCS games, but we got there more on the lack of quality in our conference than by our own merits, and it showed both times. What good is it to earn the right to play in front of a national audience if you're just going to embarass yourself?

Here's the ultimate thing. If you don't mind 8-4. If you don't mind being a fringe team on the rankings. If you don't mind playing in bowl games that change sponsor every year and are played in places that may or may not even be warm weather...then yes, the Coach P years were for you. If you were just happy to be playing in a BCS bowl once in a while, then yes, the Coach P years were for you. But that just doesn't cut it for me. And Syracuse has all the ingredients of a National title contender. They play in a great stadium for a fanbase that wants to win in an area where they are the pro team in a section of the country were they have access to some of the best recruits. There's no excuse for 6-6, 7-5, 9-4, 6-6. Sorry.

When I was a senior in 2000, I would still see some of the football players wearing thier 1996 Gator Bowl jackets. Despite going to two BCS games and being ranked as high as #12 in the country, that Gator Bowl victory was still the highlight of thier time on the Syracuse football team. If that doesn't sum up the Paul Pasqualoni era, I don't know what does...