Share All sharing options for: New York State of Mind

Even thoughI was planning on focusing on college sports, I can help but comment on today's tragic event. When I was first told that a plane hit a building in NYC, I couldn't help but get Deja Vu that placed me back in the events of September 11th. Oddly enough, when I was first told what had happened on that day, the image in my mind was that of a small bi-plane bouncing off a building...not very different than what happened today. 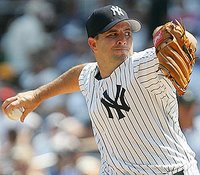 I think today proved that as much as we can talk about being past 9/11 and, as Bush loves to tell us, we're defeating the terorrists...we still lose our shit the second anything remotely resembling 9/11 occurs.

I hope we not only find out what happened to Cory Lidle but also find out about the people who were killed in the building and wounded in the rescue. We don't know much facts at the moment, but if it turns out this was Lidle's fault, I just hope the retrospectives don't honor him just because he was famous and the other dead were not. But like I said, we'll see how it unfolds.

As for calls to cancel the games this evening, I agree that it doesn't merit a cancellation (even though it seems the weather has taken care of things anyway). Had we still not known the cause of the crash or whether or not terrorists were involved...yeah, cancel everything and get the fuck out of Dodge. But since we know it was just an eerie coincidence, let's play ball and take our minds off of it for a few hours.