I Don't Think His Parents Van Can Make This Roadtrip

Share All sharing options for: I Don't Think His Parents Van Can Make This Roadtrip 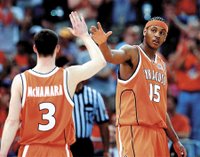 After the 2003 National Championship season, I was fond of saying to anyone who would listen that Carmelo would always be remembered for the championship but one day we would be retiring Gerry McNamara's number. At the time McNamara was a freshman but you could just see that this guy was destined to be a pantheon college basketball player...tough, gritty, clutch...the kind of guy that usually runs point for Duke and you hate.

Admittedly, the last two NCAA tournaments dampered what was otherwise a stellar Syracuse career, probably the best body of work in the history of the team. The 2005 team's loss to Vermont really stung because that team really had potential. Last year's team only got into the tournament BECAUSE of McNamara, so it wasn't so horrible when they lost...although we can't go out like that three years in a row.

With the NBA pre-season heating up, I realized that I hadn't kept myself in the loop of all things McNamara and where he ended up. It was no shock to see that he wasn't drafted but you had to figure he'd get a tryout in a few places. According to his Wikipedia page, Gerry played summer league ball for the Magic, but he wasn't offered a contract. Apparently they needed some room for Grant Hill, Grant Hill's knee and Grant Hill's kneecap.

Gerry did have some opportunities come up elsewhere in the US, namely being drafted #1 by the Northeast Pennsylvania Breakers of the USBL. The Breakers call Scranton PA home and wouldn't you know it, so does Gerry. He was also drafted by the Albany Patroons on the CBA. But it would seem that Gerry either thought his career was better suited elsewhere or found more money in Europe because he's actually playing ball in Greece for Olympiacos BC.

According to his agent, he chose Olympiakos because the one-year deal gives him some flexibility if the NBA comes-a-calling. The team is usually referred to as "The Chicago Bulls of Europe." Not so much because they won six titles or feature the best player in the world, but moreso because they have the same color uniforms. Alllllrighty. 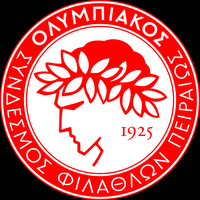 From the team website, "I don’t know much about the team yet. I only know of their great performance and their high goals. It is definitely going to be hard playing for one competition only and I will do my best to learn how to play European basketball and help my team out as much as I can. I also know the club wants to win titles and so do I; I really want to help win the Euroleague" said McNamara

The team's already playing and in the most recent game record I could find, it looks like Gerry is still up to his old tricks (9 points, 2 rebounds, 1 assist, 1 steal). Also fun to see that Gerry is playing on the same team as Scoonie Penn, whom the head coach rested in the second half of the game "in order to give [him] more time to relax."

We wish Gerry the best and hope to see him back in the US soon.