Hope is a Dangerous Thing

Share All sharing options for: Hope is a Dangerous Thing


"Let me tell you something my friend. Hope is a dangerous thing. Hope can drive a man insane."
-Shawshank Redemption

I'm a little late getting to this but its worth a post nonetheless. Even if you've noticed Syracuse football peripherally in the last 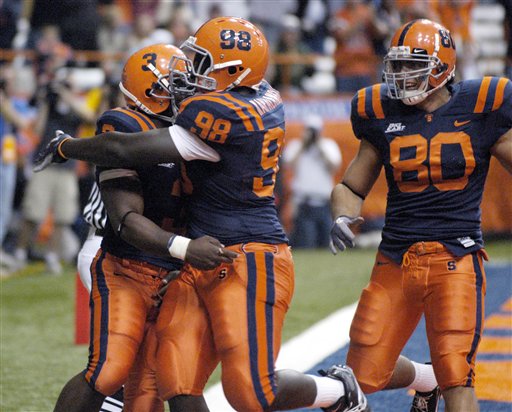 year you know its been the dregs. 1-10 last season and starting 0-2 this season. Then, somehow, the team rattled off three wins in a row (and was 2 yards away from 4 in a row including a win over a ranked team).

Via Orange44 I saw this September 26th ESPN article about the quiet turnaround of the Orange that's provided a little hope for its fanbase that we really did do the right thing in canning Coach P.

Since that article, the Orange are 1-1, but now face the daunting task of West Virginia and Louisville in back-to-back weeks. Still, the USF, Cincy and UConn games looks winnable and I love the idea of playing spoiler to Rutgers in the bizarro universe we now exist in. Dare I say 6-6 is suddenly possible?