Gives A Whole New Meaning To The Penis Game

Share All sharing options for: Gives A Whole New Meaning To The Penis Game

An opinion letter regarding last week's Purdue football game, from The Exponent, the school newspaper:

I went to Ross Ade Saturday expecting to see a good football game, but instead I saw a disrespectful showing, not by the football team, but by the student section. In the middle of the third quarter, a Boilermaker was injured at the end of a play. Usually when this happens, both home and away fans are silent out of respect for the injured player. But our student section cheered. Why? Because an inflatable penis showed up. And when the injured Boilermaker was helped off the field, we booed because the penis was hit out of the stands. Is this how much class we have left, that we are more entertained by an inflatable penis than we are concerned for an injured Boilermaker? If so, then I am embarrassed to call myself a Boilermaker. 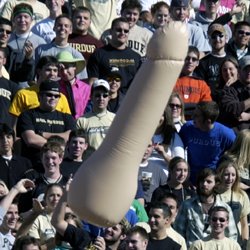 The good news? The inflatable penis will be back.